Brocade and the "Woodstock Generation"

I encourage change especially if there are technological advances that improves functionality, reliability, availability and serviceability (or RAS in short). What I hate if these changes increase risk and require a fair chuck of organisational change even more if they amplify each other (like FCoE).

What I hate even more though is for marketing people to take ownership of an industry standard and try to re-brand it for their own purposes and this is why I'm absolutely flabbergasted about Brocades press-release in which they announce a "new" generation of the fibre-channel protocol.

When the 60's arrived a whole new concept of how people viewed the world and the way of living changed. Freedom became a concept by which people lived and they moved away from the way their ancestors did in previous decades. They'd shed the straitjacket of the early 20th century and changed the world through various parts of life. This didn't mean they discredited their parents or grandparents or even the generations before, neither did they perceive to be better or different in a sense they wanted to "re-brand" themselves. They didn't need differentiation by branding, they did it by way of living.

Fibre-Channel has always been an open standard developed by many companies in the storage industry and I'll be the last to deny that Brocade has contributed (and still does) a fair chunk of effort into the protocol. This doesn't mean that they "own" the protocol nor does it give them the right to do anything with it as they please. It's like claiming ownership of print when you've written a book.

So lets go back to their press release. In that they announced the following:

When I read the first line I thought that a massive stack of brocade engineers had come out of a dungeon and completely overhauled the FC protocol stack but I couldn't be further from the truth. It were not the engineering people who came out of the dungeon but more the marketing people and they can up with very confusing terms like Gen5 and Gen6 which only represent the differences in speed technologies. Where the entire industry is used to 1G,2G,4G,8G and now 16G plus 32G, Brocade starts to re-brand these as GenX. So in a couple of years time you'll need a cross-reference spreadsheet to map the speed to the GenX marketing terms.

As for the content of the "Fabric Vision technology" I must say that the majority of component were already available for quite a while. The only thing that is actually new is the ability to map policies onto fabrics via BNA to be able to check quickly for different kind of issues and setting which is indeed a very welcome feature but I wouldn't call this rocket-science. You take a set of configuration options and you distribute this across one or more switches in a fabric and you report if they comply to these policies. The second bullet-point seems to be targeted at Virtual Instruments. From what I know of VI Brocade is still a long way off to be able to displace their technology. Utilities like frame-monitoring do not compete with fc-analyser kind of equipment. 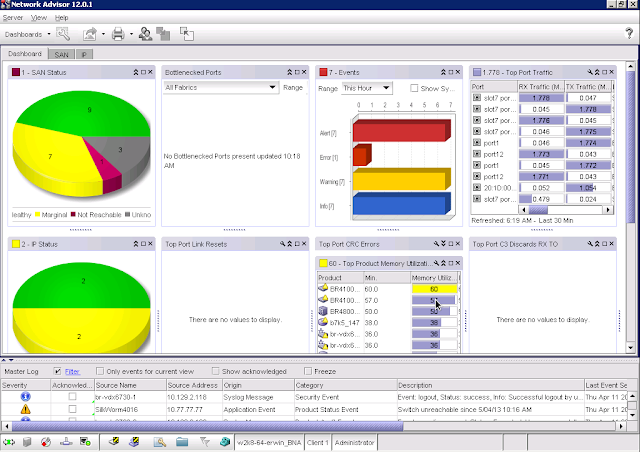 The software side of BNA and VI seems to be getting closer which I do welcome. BNA is getting better and better with each release and closing the gap to tools which provide a different view of problems will certainly be useful. It also prevents the need for polling fabric-entities for the same info.

Bullet point  3 and 5 piggy back on already available features in FOS but now can be utilised to capture these in a dashboard kind of way via BNA. Bottleneck monitoring commands in addition to credit-recovery features plus D-port diagnostics to check on the health of links were already available. The BNA dashboard also provides a nifty snapshot of most utilised ports, port-errors, cpu and memory status of switches etc. This, in theory, should make my life easier but we'll wait and see.

Don't get me wrong, I do like Brocade. I've worked with their technologies since 1997 so I think I have a fairly good view of what they provide. They provide around 50% of my bread-and-butter these days (not sure if that's a good thing to say though if you check out my job-title. :-)) but I cannot give them credit for announcing a speed-bump as a new generation of Fibre-Channel nor can I think of any reason of defining a "Vision" around features, functions and options that have been lacking for a while in their product set. I do applaud them for having it fixed though.

From my personal point of view what would be compulsory is to overhaul the FOS CLI. You can argue to take a consistent approach of using the "Cisco" like tree structure which Brocade also uses in their NOS on VDX switches but that doesn't work for me either. Moving up and down menu trees to configure individual parts of the configuration is cumbersome. What needs to be done is to painstakingly hold on to consistent command naming and command parameters. This, in addition to the nightmare of inconsistent log-output across different FOS version,  is one of the worst parts of FOS and this should be fixed ASAP.