One rotten apple spoils the bunch – 1

Last week I had another one. A rotten apple that spoiled the bunch or, in storage terms, a slow drain device causing havoc in a fabric.

This time it was a blade-center server with a dubious HBA connection to the blade-center switch which caused link errors and thus corrupt frames, encoding errors and credit depletion. This, being a blade connected to a blade-switch, also propagated the credit depletion back into the overall SAN fabric and thus the entire fabric suffered significantly from this single problem device.

“Now how does this work” you’ll say. Well, it has everything to do with the flow-control methodology used in FC fabrics. In contrast to the Ethernet and TCP/IP world we, the storage guys, expect a device to behave correctly, as gentleman usually do. That being said, as with everything in life, there are always moment in time when nasty things happen and in the case of the “rotten apple” one storage device being an HBA, tape drive, or storage array may be doing nasty things.

Let’s take a look how this normally should work.

So what happens after the FLOGI. As an example we use a connection that has negotiated 8 credits either way. If the HBA sends a frame (eg. a SCSI read request) it knows it only has 7 credits left. As soon as the switch port receives the frame it has to make a decision where to send this frame to. It does this based on routing tables, zoning configuration and some other rules, and if everything is correct it will route the frame to the next destination. Meanwhile it simultaneously sends back a, so called, R_RDY primitive. This R_RDY tells the HBA that it can increase the credit counter back by one. So if the current credit counter was 5 it can now bump it back up to 6. (A “primitive” lives only between two directly connected ports and as such it will never traverse a switch or router. A frame can, and will, be switched/routed over one or more links)

Below is a very simplistic overview of two ports on a FC link. On the left we have an HBA and on the right we have a switch port. The blue lines represent the data frames and the red lines the R_RDY primitives. 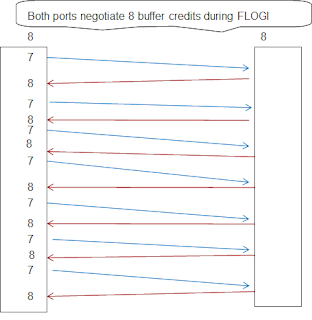 As I said, it’s pretty simplistic. In theory the HBA on the left could send up to 8 frames before it has to wait for an R_RDY to be returned.

So far all looks good but what if the path from the switch back to the device is broken? Either due to a crack in the cable, unclean connectors, broken lasers etc. The first problem we often see is that bits get flipped on a link which in turn causes encoding errors. FC up to 8G uses a 8b10b encoding decoding mechanism. According to this algorithm the normal 8 data bits are converted to a, so called, 10-bit word or transmission character. These 10 bits are the actual ones that travel over the wire. The remote side uses this same algorithm to revert the 10-bits back into the original 8 data bits. This assures bit level integrity and DC balance on a link. However when a link has a problem as described above, chances are that one or more of these 10-bits flip from a 0 to 1 or vice-versa. The recipient detects this problem however since it is unaware of which bit got corrupted it will discard the entire transmission character. This means that if such a corruption is detected it will discard en entire primitive, or, if the corrupted piece was part of a data frame, this entire frame will be dropped.

I will not go further into this since its beyond the scope of the article.

So if this R_RDY is discarded the HBA does not know that the switch port has indeed free-ed up the buffer and still think it can only send N-1 frames. The below depicts such a scenario: 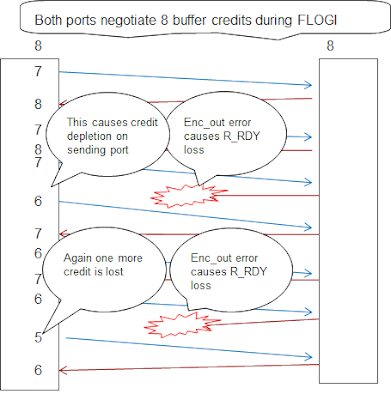 As you can see when an R_RDY is lost at some point in time it will become 0 meaning the HBA is unable to send any frames. When this happens an error recovery mechanism kicks in which basically resets the link, clearing all buffers on both side of that link and start from scratch. The upper layers of the FC protocol stack (SCSI-FCP, IPFC etc) have to make sure that any outstanding frame have either to be re-transmitted or the entire IO needs to be aborted in which case this IO in it’s entirety needs to be re-executed. As you can see this will cause a problem on this link since a lot of things are going on except actually making sure your data frames are transmitted. If you think this will not have such an impact be aware that the above sequence might run in less than one tenth of a second and thus the credit depletion can be reached within less than a second. So how does this influence the rest of the fabric since this all seems to be pretty confined within the space of this particular link.

Let broaden the scope a bit from an architectural perspective. Below you see a relatively simple, though architecturally often implemented, core-edge fabric. 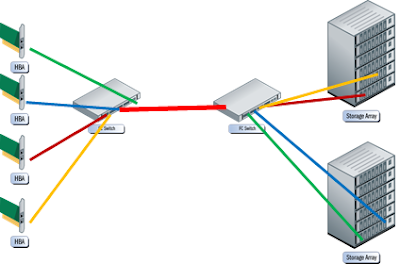 Each HBA stands for one server (Green, Blue,Red and Orange), each mapped to a port on a storage array.
Now lets say server Red is a slow drain device or has a problem with its direct link to the switch. It is very intermittently returning credits due to the above explained encoding errors or it is very slow in returning credits due to a driver/firmware timing issue. The HBA sends a read request for an IO of 64K data. This means that 32 data frames (normally FC uses a 2K frame size) will be sent back from the array to the Red server. Meanwhile the other 3 servers and the two storage arrays are also sending and receiving data. If the number of credits negotiated between the HBA’s and the servers is 8 you can see that after the first 16K of that 64K request will be send to Red server however the remaining 48K still is either in transit from the array to the HBA or it is still in some outbound queue in the array. Since the edge switch (on the left) is unable to send frames to the Red server the remaining data frames (from ALL SERVERS) will stack up on the incoming ISL port (bright red). This in turn causes the outbound ISL port on the core switch (the one on the right) to deplete its credits which means that at some point in time no frames are able to traverse the ISL therefore causing most traffic to come to a standstill.

You’ll probably ask “So how do we recover from this?”. Well, basically the port on the edge switch to the Red server will send a LR (Link Reset) after the agreed “hold-time”. The hold time is a calculated period in which the switch will hold frames in its buffers. In most fabrics this is 500ms. So if the switch has had zero credit available during the entire hold period and it has had at least 1 frame in its output buffer it will send a LR to the HBA. This causes both the switch and HBA buffer to clear and the number of credits will return to the value that was negotiated during FLOGI.

If you don’t fix the underlying problem this process will go on forever and, as you’ve seen, will severely impact your entire storage environment.

There are two ways to tackle the problem, the good and the bad way.

The good way is to monitor and manage your fabrics and link for such a behavior. If you see any error counter increasing verify all connections, cables, sfp’s, patch-panels and other hardware sitting in between the two devices. Clean connectors, replace cables and make sure these hardware problems do not re-surface again. My advice is if you see any link behaving like this DISABLE IT IMMEDIATELY !!!! No questions asked.

The bad way is to stick your head in the sand and hope for it go away. I’ve seen many of such issues crippling entire fabrics and due strictly enforced change control severe outages occurred and elongated recovery (very often multiple days) was needed to get things back to normal again. Make sure you implement emergency procedures which allow you to bypass these operational guidelines. It will save you a lot of problems.